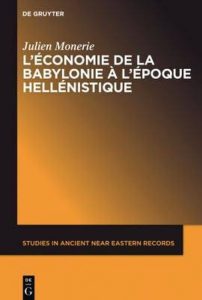 Despite the interest that has been shown by classicists and assyriologists in the economy of Lower Mesopotamia during the two centuries of Macedonian rule over the region (331-129 B.C.), no synoptic study has previously been published, even though abundant sources are available: several thousand cuneiform tablets survive from this period, as well as more than 25,000 Greek seals, not to mention the testimony of classical sources and rich numismatic and archaeological materials. This book aims to present an accessible synthesis of the topic, in the form of a regional study that takes into account all available sources as well as the weight of Mesopotamia’s heritage. The reader will find not only clear overviews of complex questions (including the impact of Alexander’s reign, the nature of Seleucid policy, the evolution of prices, and the development of banking) but also new research on issues such as the ‘Diadochi crisis’, the introduction of coinage, the evolution of the prebendary system, and the disappearance of local temples, shedding new light on the economy of one of the most richly documented parts of the Hellenistic World.