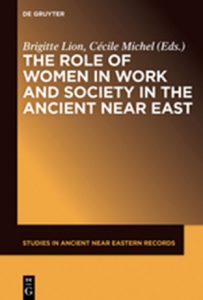 Economic history is well documented in Assyriology, thanks to the preservation of dozens of thousands of clay tablets recording administrative operations, contracts and acts dealing with family law. Despite these voluminous sources, the topic of work and the contribution of women have rarely been addressed.
This book examines occupations involving women over the course of three millennia of Near Eastern history. It presents the various aspects of women as economic agents inside and outside of the family structure. Inside the family, women were the main actors in the production of goods necessary for everyday life. In some instances, their activities exceeded the simple needs of the household and were integrated within the production of large organizations or commercial channels. The contributions presented in this volume are representative enough to address issues in various domains: social, economic, religious, etc., from varied points of view: archaeological, historical, sociological, anthropological, and with a gender perspective.

Women and Work in the Ancient Near East: An introduction 1

Weaving, Potting, Churning: Women at work during the Uruk period. Evidence from the cylinder seals 8

The Role of Women in Work and Society in the Ebla Kingdom (Syria, 24th century BC) 71

Women and Production in Sargonic Adab 90

Professional Women and Women at Work in Mesopotamia and Syria (3rd and early 2nd millennia BC): The (rare) information from visual images 112

The Sex-Based Division of Work versus Intersectionality: Some strategies for engendering the Ur III textile work force 174

Women Work, Men are Professionals in the Old Assyrian Archives 193

The Job of Sex: The social and economic role of prostitutes in ancient Mesopotamia 209

“She is not fit for womanhood”: The Ideal Housewife According to Sumerian Literary Texts 228

Women at Work in Mesopotamia: An attempt at a legal perspective 310

Work and Gender in Nuzi Society 354

The kubuddā’u-Gift in the Emar Texts 388

Women and their Activities in Divinatory Texts 429

Invisible Workers: The role of women in textile production during the 1st millennium BC 473

Beauty Experts: Female perfume-makers in the 1st millennium BC 512

Women and Prebends in Seleucid Uruk 526

Women and the Economic History of the Ancient Greek World: Still a challenge for gender studies 543

Index of professions and activities 565