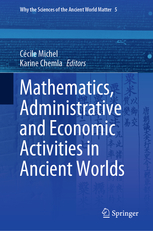 This book focuses on the ancient Near East, early imperial China, South-East Asia, and medieval Europe, shedding light on mathematical knowledge and practices documented by sources relating to the administrative and economic activities of officials, merchants and other actors. It compares these to mathematical texts produced in related school contexts or reflecting the pursuit of mathematics for its own sake to reveal the diversity of mathematical practices in each of these geographical areas of the ancient world. Based on case studies from various periods and political, economic and social contexts, it explores how, in each part of the world discussed, it is possible to identify and describe the different cultures of quantification and computation as well as their points of contact. The thirteen chapters draw on a wide variety of texts from ancient Near East, China, South-East Asia and medieval Europe, which are analyzed by researchers from various fields, including mathematics, history, philology, archaeology and economics. The book will appeal to historians of science, economists and institutional historians of the ancient and medieval world, and also to Assyriologists, Indologists, Sinologists and experts on medieval Europe.